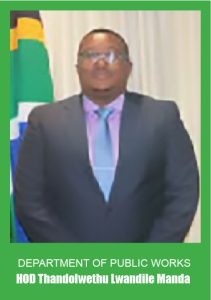 Thandolwethu Lwandile Manda has over 13 years’ senior management experience predominantly in Local Government.  Over five (05) years of the 13 he was an Accounting Officer across three (03) Municipalities: Ntabankulu, Abaqulusi and Jozini Local Municipalities.

Whilst in KwaZulu Natal he participated in implementing Section 139(1)(b) constitutional interventions for over three (03) years across two (02) Municipalities: Abaqulusi and Inkosi Langalibalele Municipalities. These interventions naturally emanate from a complete breakdown in governance and poor financial management.

His academic qualification as a Masters holder of Change Management came to great use as he was expected to draft a recovery plan effectively a business re-engineering strategy. This involved effectively restructuring the organisation to meet its current and future needs.

In the two (2) interventions that he has been involved with, the Municipalities had a disclaimer audit opinion. In Abaqulusi, two (02) years down the line, was recommended for closure as an intervention and the opinion had improved to an Unqualified Audit Opinion. At Inkosi Langalibalele the Municipality had failed to submit its Annual Financial Statements and in the year under intervention the main task was to submit on time with an improved quality.

The rest of the years in senior management he earned as a Director Corporate Services reporting to the Accounting Officer in Ntabankulu Local Municipality for a period of five (05) years.

Over the thirteen years he has concluded that senior management in any organ of state has to be about a vision, passion and willingness to serve.